The national competition consisted of two parts — an online exam and a hands-on cabinetry project. The custom cabinetry portion of the contest  took place on June 16  from 8:00 a.m. – 2:00 p.m. The National Cabinetmaking competitors had to think on their feet as they were only given the plans for their woodworking project at the moment the competition began and had a limited amount of time in which to complete their project. Scott Fletcher, President and CEO of CWWC, served as a Professional Industry Partner Proctor and monitored Brodey as he completed the tea box project. Two cameras also were set up in the DCE Senior High’s newly renovated High School Wood Manufacturing labs so the SkillsUSA national judges could view Brodey's performance live.

“We’re greatly appreciate Mr. Fletcher donating his time and serving as a proctor for this national event. He’s played an important role in our Wood Manufacturing program donating plywood materials that help us keep the costs down for student projects and ensure that all DCE students have access to our woodworking curriculum and SkillsUSA events,” notes Aaron Hoffman, DCE Career and Technical Education coordinator.

Brodey gained critical woodworking skills under the tutelage of DCE wood manufacturing instructor Chad Pernsteiner during his career at DCE Senior High. A 2021 DCE graduate, Brodey is already working  full-time as a pre-apprentice with Systems Technologies, a division of Pieper Electric, Inc. 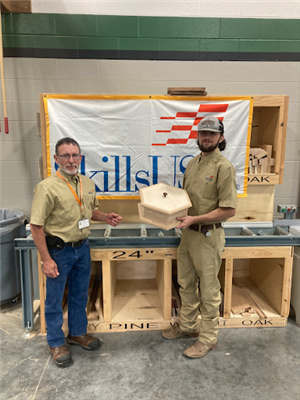 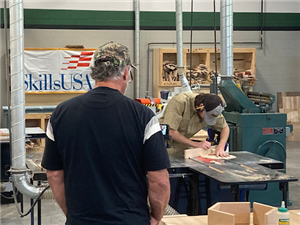