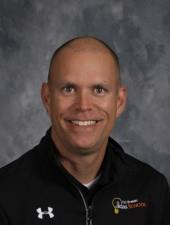 Mr. Stachovak earned his degree in mathematics education from UW - Stevens Point and taught in “traditional” settings for several years.  In the fall of 2010 an opportunity for D.C. Everest students to learn in a project based environment presented itself and he became a founding member of Idea.  Mr. Stachovak is a believer in PBL and enjoys seeing the progress that students make as learners while they attend Idea. In his free time Mr. Stachovak enjoys spending time with his family, coaching baseball, golfing and doing just about anything outside.